Brain Trauma, PTSD and TBI: Get The Facts Here
Love it? Share it!

When it comes to PTSD and TBI, brain trauma changes one’s nervous system.

Throughout my therapy, I have learned a lot about cause and effect of Complex PTSD and (C)PTSD. Traumatic Brain Injury (TBI) has a lot in common with PTSD and (C)PTSD due to both deriving from brain trauma. In fact, scientific research focusing on the correlation between PTSD and various brain aspects are conducted often.

Researchers continuously hope to discover new ways to treat (C) PTSD and TBI. So much has been uncovered about traumas to the brain, creating a stronger awareness within the general public. Somewhat, reducing the stigma attached to PTSD and TBI. But mostly, to educate society. For example, here are some brain trauma facts surrounding the nervous system. Karen Pritchard, MA, LPC, references the Triune Brain Model as she explains the different sections of the brain and their functionality. Pritchard specializes in trauma therapy and describes what happens to the nervous system after brain trauma occurs. The brain has three main parts: Reptilian Brain (brain stem), Limbic System (mid-brain), and the cerebral cortex.

The brain stem moderates our basic functions and automatic systems. The mid-brain is the home for emotions and storing memories. Lastly, the cerebral cortex governs our reasoning abilities, abstract thought, and more. Each section of the brain works together to process information and activate a response from other areas of the brain, and physical bodies.

The autonomic nervous system is designed to remember what causes us harm. Therefore, acting as our own internal security guard. When activated it prepares us for victorious defense. During a threatening situation we typically seek safety and/or defense.

There are three responses when facing a threatening situation. The first is to seek protection and comfort from a friend or family member. Another response system is the “fight or flight”, (sympathetic response) where it feels though you have one foot on the brake and the other on the gas petal at the same time. And lastly, there’s the parasympathetic response where you could engage in freezing, playing dead, numbing, and or dissociation.

What Happens when Brain Trauma Occurs 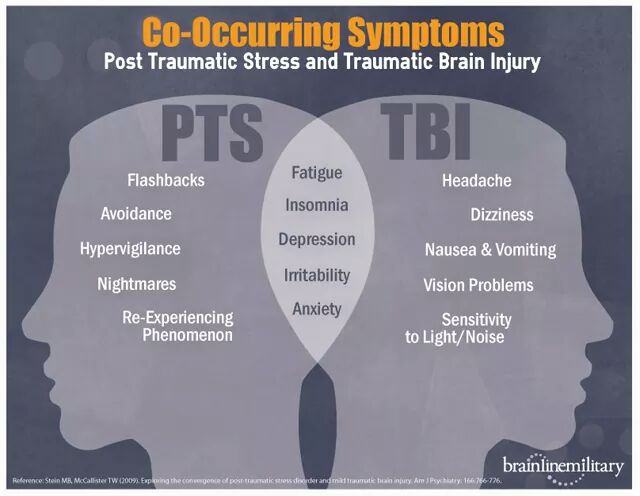 During a traumatic event you naturally respond using one of the three systems. When your body senses danger your mid-brain locks out the cortex because it takes over for survival. First of all, the cortex secretes a calming chemical but is unable to when the mid-brain dominates the brain’s function. After you don’t feel threatened any more the cortex comes back online to sooth your anxiety and adrenalin. For a person with CPTSD, PTSD, or TBI, the brain works differently.

At first, when a person with CPTSD, PTSD, or TBI senses danger, their brain and body reacts just like someone who does not suffer from brain trauma. Then their mid-brain get’s stuck on controlling the situation. Typically, the cortex does not get to engage for the soothing to take place. Instead, the person is a prisoner to these “instinctive emotional responses”. They are unable to calm and re-regulate their body and mind in the same way a person without these disorders.

After a dangerous situation passes, your body will attempt to eliminate the bad energy and return to a normal functioning state of being. However, this doesn’t always happen the way it should. Making matters worse, this makes it seem like we are totally out of control. Holding this trauma energy in our bodies is toxic. It leads to conditioning our systems to shut down in unhealthy ways. Those who suffer from brain traumas leading to PTSD and TBI, have an even higher probability of trapped trauma energy. The symptoms associated with Post Traumatic Stress Disorder , (C) PTSD and TBI are related to the brain’s gears getting “stuck” in its trauma response process. Only, not completing the full process. In some cases, sufferers of PTSD and TBI experience responses from all three systems. Either seeing characteristics of one defense system during one episode, and another the next time symptoms flare up. Or, several during a single incident, in sequence. Perhaps, you have seen your loved one go through multiple PTSD and TBI symptoms.

Additionally, when someone goes through trauma  severe enough, it can cause injury to their brain. Like PTSD and TBI for instance. The actual injury happens due to an over-active amygdala. During trauma the amygdala fires neurotransmitters in dangerous excess. Consequently, injuring the amygdala. Then, wwhen someone re-experiences their trauma (PTSD and TBI episodes, flashbacks, and nightmares) tthey reinjure the amygdala. Compounding PTSD on top of PTSD. Preventing a cure for PTSD and TBI, as of now anyway. The good news is, that in a safe and supported space with a therapist who specializes in brain trauma, it is possible to retrain the brain and body to respond correctly. As a result, you or your loved one can learn how to move this trauma energy out of their bodies. Especially, regarding malfunctioning defense responses, and energy discharge; even years after the original traumatic event.

This can bring significant relief and peace, as well as restore joy in one’s life. Most importantly, we can become allies with our nervous systems, working together, opposed to it disrupting us. In conclusion, your loved one can have a choice around their nervous system response, and learn to work with it in a way that allows them victorious defense where they weren’t able to have in the past. Complex Post Traumatic Stress disorder, PTSD and TBI can be managed where you can enjoy recovery.

Before you leave, don’t forget to check out these articles. Most readers find them most valuable:

2. Better sleep with these 9 tips that really work.

Do you have a story to share or is there something you really want to know more about?

Or maybe an idea for my next article?  Leave me a comment below.

My personal reviews are for products and services that I’ve used. Each product listed are what I personally have benefitted from, trust, like, and approve of. If you find these products valuable and you purchase any of them to help you or your loved one along your journey to recovery and remission of CPTSD or PTSD symptoms please note that I am compensated for each product purchased. The compensations earned help to fund my blog and reach out to others like you and I who are on the same journey.

The ultimate PTSD stress survival kit that everyone should have is right here at your fingertips. Essentially, if you or your spouse has been diagnosed with PTSD then your entire world has changed. And, when someone is diagnosed with PTSD it isn’t uncommon for the partner without PTSD to take on the role as a […]

Vicarious PTSD, also know as Secondary PTSD, happens to the caregiver of the person suffering symptoms of Post Traumatic Stress Disorder. In my personal experience, I went on auto pilot when my husband was diagnosed. We had known there was a problem manifesting but we didn’t have a clue as to what was in store for […]

How to explain PTSD to a child or children may not come as easy as describing it to adults. When I first tried explaining it to my husband’s family they couldn’t understand how someone couldn’t control their PTSD symptoms. As if it were my husband’s conscious choice to disappear. Not only disappear metaphorically speaking but […]

Complex Post Traumatic Disorder and PTSD safety procedures include actions for children, spouses, and the CPTSD or PTSD sufferer. A CPTSD safety plan is necessary. Due to the violent nature of some of the  symptoms associated with CPTSD and PTSD, it is important to put into place a safety plan as soon as possible. This is […]

Life with PTSD can often seem unbearable, uncertain, and out of control. However, PTSD self help practices can make a significant impact on a family facing PTSD. There’s recovery just around the corner through PTSD self help support, and determination. Although your loved one suffers one of the most challenging diseases does not mean they cannot […]

One side-affect of PTSD for me:

Get to know PTSD Wifey

PTSD Explained by a 6 year old

Your information is kept private and for internal use only. Don’t worry, I can’t stand spam and will never share or sell your contact information. By subscribing to my Newsletter, you acknowledge that you will receive an email once per week containing content from my website, valuable resources, and at times, affiliate content that I include with the Newsletter. Each Newsletter is designed, written, and sent by me personally. Feel free to contact me anytime with any questions or concerns.
Necessary Always Enabled
Necessary cookies are absolutely essential for the website to function properly. This category only includes cookies that ensures basic functionalities and security features of the website. These cookies do not store any personal information.
SAVE & ACCEPT